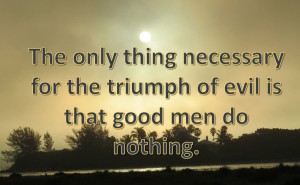 “The only thing necessary for the triumph of evil is that good men do nothing” has got to be the best quote that no one actually ever said. That aside, most of us are looking at ourselves in the mirror these days and thinking that we are good people who are wondering what it is that we are supposed to be doing.

About what? Come on, you know. We all know what is happening out there. We just don’t want to think about it.

For one, the election is only about thirteen weeks away now and we sort of hope this will mostly go away after that. Some of us support Hillary with enthusiasm, other accept her as the best choice and think she will be okay. Most of us can’t imagine that she won’t win. After she does, this nonsense will stop, right?

And the people you know who support Trump say it is no big deal. Oh, come on, you do know some of them. Acquaintances, neighbors, relatives, probably nice people too. They don’t go to the rallies and scream obscenities at minorities, and they like other things about him that you kind of understand. He speaks his mind, he’s not slick. They say most of his supporters don’t focus on hate and that Trump himself doesn’t really feel that way. He won’t really act that way if he’s elected. The nonsense will stop then, right?

Will it? The Southern Poverty Law center calculates that the number of hate groups rose by 14% in 2015. Former KKK leader David Duke has announced that he is running for the open Senate seat in Louisiana to stop the “ethnic cleansing” of white people. The New York Times has just published a compilation of uncensored expressions of hate from Donald Trump supporters at his rallies. You can view it here.

Okay, so maybe we do have a teensie weensie bit of a growing hate problem in this country. What is is that good men (and good women) should be doing?

I’ve been struggling with this question for awhile. It seems to me that one good start is to seek out objective sources of information. Independent fact checkers do exist. In aggregate, they approach providing actual truth. Then, when we have real facts at our fingertips, we need to share the information. We all need to vote our consciences and help others get to the polls to do the same.

I think we need a zero tolerance policy for demeaning humor in general, and particularly for humor that targets those whom are forced to play the game of life on a more difficult setting. (If you don’t know what I’m talking about check out the link.) We need to remove name calling from our speech patterns. Check out the Southern Poverty Law Center’s website on teaching tolerance. (Of course, they’d love a donation from you while you are there.) 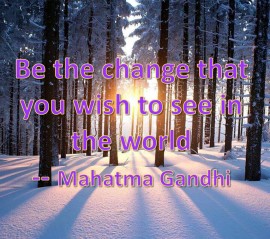 We need to take a few slow breathes and say “this is not the world I want.” Whatever our personal politics are,  surely we can agree that throwing rocks at each other is a bad idea. As Gandhi said, we need to be the change we wish to see.

In 1770 the Irish statesman and philosopher Edmund Burke did say “When bad men combine, the good must associate; else they will fall, one by one.”

In 1867 the British philosopher and political theorist John Stuart Mill did say “Bad men need nothing more to compass their ends, than that good men should look on and do nothing.”

Okay, maybe neither one is quite as pithy as the fake quote at the beginning, but we all get the point.

2 thoughts on “Good people doing what?”